“They” say you have to crawl before you walk.  “They” also say that you can’t know where you’re going unless you know where you’ve been.  Well I’ve never met “Them”, but I know that

A few weeks ago we introduced you to Brian McFadden, local all-round good guy and driver of the start-up company SiQ Mountain Industries.  If you’ve forgotten (shame on you) or have not yet read his introduction on our blog (you’re getting coal for Christmas), let me refresh your memory.  Brian completed the RedBull400 in Whistler last year (I’m tired of giving you the links, use the Googley box yourself) and finished with a time of 6:09, placing him 163/441. I would say this is pretty damned good, but, Brian isn’t interested in good – he is striving for great.

So he came to the best, learning to crawl again; to learn to crawl again; but more on that in a bit.  As we do with ALL of our clients, we went through a thorough history of injury, sporting background, dogs vs cats, posture assessment, dynamic movement analysis, and a discussion of which Star Wars movie was the best.  All of this data, both physical and emotional/cognitive, gives us the tools on how to approach this unique athlete; and we’re all athletes.  Not only do the myriad of physical test give me an indication of where to take his training, but the other “soft questions” allows me an insight into his personality, allowing me to coach him the way he needs to be coached.

Now, The juicy details…  The past injury history was fairly unremarkable.  Broken right tibia at 8 years old, fractured left wrist around ‘95/96.  Fractured 2nd toe on the left foot.  And most recently in January of 2019, a Grade 1 Sprain of the left AC Joint (aka separated shoulder).  Taken alone, none of this is matters much as bones heal and muscles repair, but they always leave behind their unique thumbprint on a person’s movement patterns.  So, we’ll head there next.

I use a version of the Selective Functional Movement Assessment (SFMA).  The SFMA was developed by people much smarter than I am, but I am closing the gap.  “The SFMA is our clinical assessment for those who experience pain. It is a movement based diagnostic system which systematically finds the cause of pain – not just the source – by logically breaking down dysfunctional movement patterns in a structured, repeatable assessment.”

When looking at Brian, you could see that his right side was very dominant.  He displayed typical traits of right hand dominance with a depressed right scapula and lowered right ear compared to the left.  The tops of his pelvis (ASIS) were level, so I knew that the reason had to be north of the pelvis in the torso.  He also displayed a very slight torso rotation to the right; clearly a trend was developing.  Brian also displayed a marked turning out of his right foot and a visibly hyperextended right knee while standing.  We determined that Brian typically puts all of his weight on his right side while standing still, and this has caused the hyperextension of the knee and chronic load of the hip musculature.

Continuing to the movement portion, we found that cervical flexion, touching chin to chest, was limited and the reason was a Tissue Extensibility Dysfunction, and nothing with the joint itself or a Stability/Motor Control Dysfunction.  This tells me it’s the hardware, not the software at the neck.  Further breakouts revealed a locked long status of the neck extensors along with poor control with the deep neck flexors.  Easy fix with a little voodoo knowledge.

As with most people, Brian had extremely limited thoracic spine extension, although his thoracic rotation was adequate.  We will tackle this primarily through some mobilization techniques such as Functional Range Conditioning, as well as Dynamic Neuromuscular Stabilization.  We will first teach Brian how to breathe more efficiently, via using less of his upper thoracic musculature for inhalation, and how to reposition the lower rib cage for more optimal breathing patterns, which in turn will allow the muscles of the upper thoracic area to hold less chronic tension and allow for better movement.

The most glaring movement impairment noted in Brian’s assessment was a major scapular dyskinesis.  What is that?  Well, his shoulder blades move like shit, that’s what.  During shoulder abduction, the medial borders of his shoulder blade “wings” out.  That can indicate poor control in muscles such as the Rhomboids and Lower Trapezius.  One reason for this is the lack of thoracic spine extension, which results in compensatory movements in the scapula.  Why is this important?  Have you ever tried to shoot a cannon from a canoe?  You’ll miss the target 100% of the time because there is no stability.  Brian’s entire upper body strength will be lower as he is in essence “shooting the cannon from the canoe” or a very unstable scapula.  The good news is this is a relatively easy fix, and he’s not a kayaker! Looking at Brian’s squat technique, he has great mobility through flexion/extension of his hips.  When I asked him to squat as low as he can, he certainly was able to get ass to grass.  This is awesome if you’re hiking in the woods when nature calls, but less than optimal when looking at axial loading through the skeleton.  When I intervened and asked Brian to go as low as possible until his “butt winks”, I noted that he was around parallel to the floor with his thighs.  This is not a bad depth, but certainly not as good as he can/should be.  So what’s the deal with the “butt wink”?  To me it indicates that he does not have great stability at the pelvis.  Any lower than a parallel squat, and he does not have the core strength (general term, don’t @ me) to maintain a solid pelvis, so his will place undue stress on his lower back and lengthen his hamstrings.  There’s a whole lot more to discuss here, but we’re not in an advanced exercise prescription class; I ain’t giving that shit away free, yo! 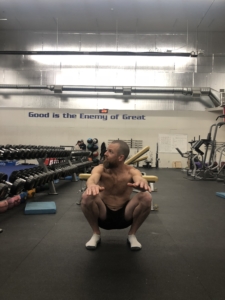 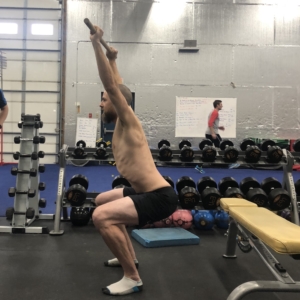 Finally we noted that Brian had adequate range of motion in his ankles, however his right ankle showed significantly less mobility than his left.  This is of importance as he will be running up a very steep hill and there will be a lot of tension developed through the achilles.  Finally, he displayed adequate, but certainly not great range of motion with respect to hip internal and external rotation.  While his hip internal rotation is less than 15 degrees, he shows close to 45 degrees of hip external rotation. 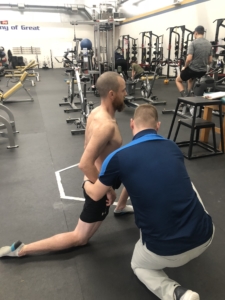 So there we go.  To be clear, this is not all the data I collected, but you’re already tired of reading this.  What really matters is that I got all the goods on him that I need to create the right program for Brian.  I’ve determined what we need to work on physically, the next step is to determine his performance testing. Note* this is done, but will be revealed during a subsequent blog.

What does all of this fancy talk mean?  For you, maybe nothing, but for us it’s everything.  You don’t need to know all the subtle nuances of your body’s movement maps, but we do.  Good thing for you, is that we are really good at this.  So the question is, who’s next?

About the Author: Shane Pizzey

As a recognized leader in health and athletic performance enhancement, Shane pushes the boundaries of conventional training. He has studied the philosophies of many of the world’s best strength coaches, some of which he has worked with, and has created a style of training that enables him to get the best results from all of his clients. His roots are grounded in proven sport science techniques and he combines this with the most up to date research and tomorrow’s emerging coaching ideas.